This is a great looking game. Obviously it is a cartoonish style as opposed to more life like games like Watch_Dogs, The Last of Us and countless others, but it is very well done and very colorful. All the scenery is fantastic, from the buildings to the abandoned cars in the streets. I really like the design and the coloring of the OD’s, and it seems like the bigger and uglier an OD is, the better the character was drawn. Again, just a great looking game.

The sound effects and dialogue for Sunset Overdrive are also pretty well done. One problem I’ve noticed however, is that some of the soundbites from our character can get a little repetitive if you just start running around the city searching for collectibles or just killing random enemies. Part of this is to serve as a reminder to move on to the next mission. But some of it is just cheesy, and while it has it’s charm, once you hear it for the fifth or sixth time, it can get a little old. This does not detract from the game very much though.

After a brief tutorial on running around, jumping and grinding, a quick flashback scene is shown where our character is pushing a big trash bin (that’s right, you begin the game as a janitor) at a big party for the first launch of FizzCo’s new energy drink, Overcharge Delirium XT. Problem is, the new drink turns people into mutants, which leads to our character running away. After the scene, we are transported back to our character’s apartment(which is where we ran, jumped and grinded to in the tutorial), which is about to be overrun by the mutants, that we will soon learn are called Overcharge Drinkers, or simply, OD.

We are saved by a crotchety old man named Walter. Walter gives us our first weapon and takes us back to his base. We soon begin helping Walter and his friends gather supplies and fight OD. Walter has plans of escaping the city and exposing what FizzCo has done here in Sunset City, but alas, Walter dies while saving you.

Along the way and as we continue, we are introduced to new varieties of OD and other enemies, new weapons, learn about amps and overdrives, as well as meeting the other factions, the Oxfords, Troop Bushido, and the Fargarths.

The primary aspect of playing Sunset Overdrive is moving. If you stand still, you are going to be in trouble quickly. If you stand still while in combat, you are going to die quickly. So obviously you need to keep moving by grinding on rooftops, power lines(can grind on top with your feet, or undergrind by hanging from the line), fence tops, etc…, jumping and getting some massive air off of cars, bushes and trees, A/C units, awnings, and several other things I’m forgetting, and/or running along walls. As you can tell, there are quite a few ways to get around Sunset City.

We also get to carry nine weapons at a time. One melee weapon and eight shooting weapons that can be selected from weapon wheel. Amps can be used to make weapons more powerful or provide bonuses for killing enemies. In addition to weapon amps, there are also Melee, Hero and Epic Amps that offer various boosts and benefits for you. As expected, some amps are more beneficial than others, but that also depends what boosts are more important to you and your exact style of play.

There is an awful lot to like with Sunset Overdrive. It is a great looking game with some good sound effects and dialogue. The story, while expectedly outlandish, is pretty good. There are a good number of weapons and they are creative as well. But most importantly, this is just a fun game. And when it comes to spending your money on a video game, being fun to play is the best thing a game can be if you want my opinion. 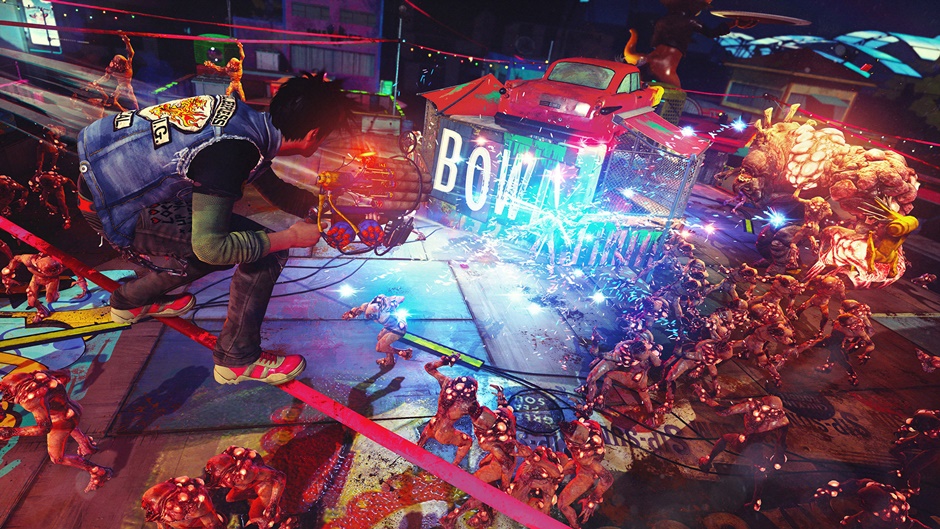 About the only thing I can point to as a draw back is some of the soundbites that can get a little repetitive. This does not take away from the game very much, and honestly I feel like I’m nitpicking here, but it is what it is.

I can not express enough just how much fun I have been having playing this game, and I seriously need to get back to it so I can beat it(and maybe jump on some DLC). There is a lot to enjoy with this offering from Insomniac Games and Microsoft Studios. If you have an Xbox One and you like over the top, crazy ass shooters, then Sunset Overdrive is a game for you.

While I absolutely love this game, it’s not quite a 5 star classic. The repetitive soundbites I spoke about earlier is not what holds it back, but I can’t quite put my finger on what it is. Basically it is just a gut feeling I have. With that said, I’m going 4 stars. Great game, definitely worth your time, but just short of classic status.

Sunset Overdrive gets a four out of five: GREAT.

View all posts by