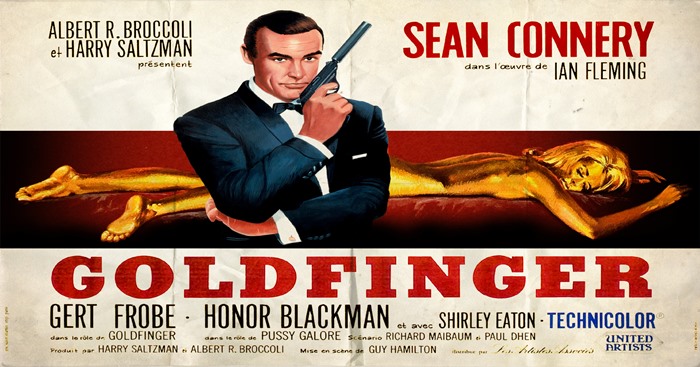 “Bond: Do you expect me to talk? Goldfinger: No Mr. Bond, I expect you to die!”

Hello everyone and welcome to the third entry in my series of reviews covering the James Bond film franchise. Tonight we enter into what many fans and critics alike consider to be the ‘high ground’ of the series overall. If you read my previous entry in this series, you of course know that I do not share this opinion, as I feel that designation still belongs firmly to ‘From Russia With Love’ but that aside, the film I am about to review is still no less important in terms of its significance to the Bond series and popular culture in general. But all that aside, we should answer the question most important to us here first and foremost; that being, is it a good movie? You bet your bullion it is, and one that is worth its weight in gold, as far as quote-ability, re-watch-ability, and most importantly, just plain old fashioned James Bond styled fun and mayhem. As in the previous two films, and for the next couple of them, James Bond here is portrayed by the incomparable Sean Connery. By the time Goldfinger rolled around in 1964 you could see Connery had grown into the role of James bond like a well worn suit coat. He had all the subtle machinations and movements down to a tee. He had mastered all the quirks and characteristic traits of Bond and everyone accepted him as the character already, so there was no need here to really introduce the character like they had done in previous movies. Audiences from this point on knew what they were getting when they went to see a movie that carried the Bond moniker on the marquee, and this film would be the one that for the most part would define what that was all about for years to come.

However, there were still a couple of firsts to be enjoyed in Goldfinger. This movie marked the beginning of the Bond tradition of including a pre title sequence action scene, culminating usually with a classic one liner, followed by the title sequence itself, sung here for the first time by a famous pop star, another tradition started here that would find use in nearly all other official James Bond films. Most notably, this movie was the first one to feature a special Q branch designed James Bond automobile. In the previous movies James Bond had already established his mastery of most ordinary automobiles, but now the game was about to be changed completely. Not only did the bad guys have to battle Bond’s superior driving skills and nerves of steel, now they also had to worry about any number of possible contraptions attached to his customized Aston Martin by that utterly diabolical and endlessly clever old fellow known as Q. From ejector seats, to machine guns, to tire puncturing tacks being strewn about from the car’s rear area, no one was safe from 007, whether inside or outside, in front of, behind, or even beside Q’s prized creation. Of course to Q’s endless frustration, this also included the car itself as it (as well as every other gadget ever given to Bond throughout the series) would eventually be spectacularly destroyed either by one of the villains or by Bond himself. Still though for the time it is onscreen in this film, Bond’s first truly ‘Bond car’ is showcased for every bit of entertainment potential it has to give. Not surprisingly the demand and prices for these cars always go up exponentially with the release of every current Bond movie that features them in the action.

Goldfinger also features what I would personally say to be the best villain and henchman of the entire series, first of course with the title character of Auric Goldfinger, and secondly the famous mad hatter himself, Oddjob, played with delightful intimidating malice by Japanese professional wrestler Harold Sakata. It is made clear throughout the movie that James Bond is physically no match for Oddjob, although to be fair, neither is anyone else in this movie’s universe either, and perhaps in the entire series to boot. He has the ability to decapitate anyone within seconds with a simple fling of his razor sharp top hat, and if that is not available, he can always render you unconscious with a simple judo chop to the skull. Mike Tyson in his prime could stand and wail on him all day, but would do little besides perhaps break both of his arms and all of his knuckles before being taken out and disposed of in a junk yard car compacter. In one of the iconic scenes of the franchise, Oddjob deploys a most unusual method of killing a Bond Girl, by covering her naked body from head to toe in gold paint, thus suffocating her somehow in the process according to Bond. If Bond is going to best this titan of the Orient, he is going to have to use every bit of cunning and ingenuity at his disposal, or else he will wind up as little more than chop suey in a short manner of time.

This film marks the one singular departure from the storyline followed in all other Sean Connery Bond movies, where all the chief villains are supplied by the S.P.E.C.T.R.E organization. Goldfinger has no known affiliation with that alliance of maniacs, but with his massive accumulated wealth in gold bullion he scarcely has need of them or any other criminal agency to supplement his own devious intentions. As I said earlier, Goldfinger is probably my favorite villain in all the franchise, rivaled only by the head of S.P.E.C.T.R.E, Mr. Blofeld himself, although it’s hardly a fair comparison, as Blofeld appears in numerous films and is played by many different actors over the course of several years, whereas Goldfinger has to get his work done in one feature film. He is more than up to the challenge in terms of ambition though, as this movie finds him, rich as he is, seeking to commit the ultimate crime. He’s going to rob the gold depository located inside of Fort Knox. Why is he doing this you ask? He’s already presumably one of the world’s richest men; however the end game here is power more than it is just financial gain. His mission is to take the gold from Fort Knox in order to devalue the American currency to a point that it is functionally worthless, and therefore, they, and most of the free world would have to deal with him to get their fair share of gold to back up the paper money. Good thing this movie was made in the 1960s, because with present inflation figures, and the passing of the current stimulus package, Goldfinger might have found this mission to be rather redundant and thus decided it to be not worth his time.

If Goldfinger has one weakness, beyond his unfathomable greed that is, it is undoubtedly his pride. He has endless chances to kill James Bond throughout this movie (as displayed in the famous scene where he has him tied to a table being cut in half by a giant laser beam), but unfortunately for him, he has been infected by the infamous ‘talking killer syndrome’ in which, a villain, when placed in any situation where he has a chance to kill the good guy, instead through powers beyond his control, begins to explain in great detail every one of his mischievous plots, thereby giving our hero, some much needed time to formulate a few plans of his own, and thus save the day. One scene that always kind of perplexed me in Goldfinger was the one where Auric sets up this very expansive and presumably expensive display of Fort Knox in miniature, complete with a moving floor set up to make sure he gets everyone’s full attention when it is being unveiled. The people he is showing this grandiose design to are the figure heads of several prominent Mafia families whom he is trying to convince to come on board with him in this endeavor. Anyway, after explaining the plan in all its intricacies, he then proceeds to flood the room with nerve gas and kill them all. So, I wonder, what was the point of all that pageantry to begin with? Alas, I think perhaps, it was just because he spent all that time and money on building this grand set up, and in the end had no one to show it off to besides himself. This would also somewhat explain why he keeps Bond alive for so long. For him, the real pleasure is not so much in committing a grand heist, but beholding the admiration and astonishment of other people when describing it to them. So it is wisely said that, “pride cometh before a fall…”

I would be remiss if I did not mention that this film contains perhaps the single most well known and suggestively named of any Bond Girl in history in one Ms. Pussy Galore… “I must be dreaming” says a just awakening Bond when he is thus introduced by her on board Goldfinger’s airplane. Ms. Galore is Goldfinger’s personal pilot, and plays an important role in ‘Operation Grand Slam’ (the code name of the plot to rob Fort Knox) by acting as the head master of a batch of young female recruits who are also being trained as pilots. For what it’s worth, you can never accuse Mr. Goldfinger of not being an equal opportunity employer. But, when one is dealing with James Bond, it is normally never a good idea to place too much trust in any female around you, whether she is your top aid, your girlfriend, or even your wife. Though she will play harder to get than many of Bond’s numerous other conquests, what girl in the end can ever successfully stave of the charm and witticisms of James Bond for an entire movie? So now you have the plot in a nutshell and all the major characters and gadgets featured prominently in Goldfinger thoroughly laid out for you. The question of whether or not this is a good movie was answered in the opening paragraph. With few exceptions, the rest of my reviews will probably be all down hill from here in terms of the quality of movies being dealt with (hopefully not in terms of writing though)… After this there were many more fun additions made to the James Bond franchise to be sure as well as a couple stinkers, but I’m sure you will notice from this point on that, again, with a couple notable exceptions, most of the movies being reviewed will begin to blend together so as to become almost indiscernible from one another completely. Such is not the case here though, so I can rest assured in giving this movie my one hundred percent seal of approval. It is without a doubt one of the ‘essential’ films in the Bond franchise, and one that is difficult not to enjoy, regardless of how many times you’ve seen it. This concludes our review of Goldfinger; thank you for reading.

James Bond will return next time in my review of ‘Thunderball’. See you then.

Goldfinger gets a five out of five: EXCELLENT.