Tonight, WWE presents NXT In Your House 2021 LIVE from the Capital Wrestling Center in Orlando, FL. The latest NXT TakeOver, In Your House, will be streaming exclusively on Peacock and also available via pay-per-view.

In total, five matches are scheduled for the 2021 installment of NXT In Your House; four of those matches are championship matches and in all five titles are on the line.

While this TakeOver didn’t have the strongest build, with every match just coming together within the past few weeks, it still looks really good. NXT has been producing these Network events since February 2014 and have yet to deliver one that wasn’t really good.

So despite the build, I doubt this one will be the one to break the streak of great TakeOver’s.

As a kid, I grew up with In Your House. I loved those first ones in 1995 and 1996. That’s still my favorite era of WWF/E wrestling. The In Your House nostaglia gets me hyped, and I’m looking forward to seeing Todd Pettengill back home (and really he should stick around, there’s still no better hype man).

With that said, let’s jump right in to our NXT In Your House predictions.

I’m not a fan of Triple Threat or Fatal 4-Way matches, so I definitely don’t care for a Fatal 5-Way. To me, it’s just lazy booking. Championship matches should be well built towards and be one-on-one.

With that out of the way, the match will definitely deliver. It’s got too much great talent in it to not deliver as well as a match of this type possible can.

For me, there’s only two ways this match can go. Either Karrion Kross loses the title by not getting defeated and goes on to the main roster, or Kross retains. Those are the only options that make any sort of sense.

Kross isn’t the type of star that’s going to stay in NXT long. He’s got everything it takes to be successful on the main roster where he is ultimately a better fit anyway. Granted the booking of former NXT talent on RAW and Smackdown hasn’t traditionally been the strongest.

If he isn’t heading to the main roster, then he absolutely should retain the championship here. He hasn’t been long regained it, and we certainly don’t need him dropping the title by not being the one pinned or made to submit. I don’t want to see Kross in chase mode for the title he didn’t actually lose again. We just saw that.

I think there’s money in a Karrion Kross/Adam Cole singles match, and it’d be a shame if we don’t get that at some point.

Regardless of who wins, I think Gargano takes the loss and it in no way hurts him the way it would the others.

If Kross is going up, I could see Adam Cole getting the title back. Ultimately, I think Kross has a little more to do in NXT and will thus get the win and retain the championship in the match he asked for.

First off, I love the graphic above. That’s a match card; just compare it to the garbage they make for the main roster shows.

While I believe this will be a great match, and a really good showcase for Ember Moon, the result is a foregone conclusion. I don’t see any chance Ember Moon wins the title here.

That’s not a knock on Ember of course; she’s fantastic and more than deserving of another run. There’s just no way Raquel loses the title after just winning it at the last TakeOver in April.

Raquel González isn’t the best wrestler in the best women’s division, but she doesn’t have to be. With the In Your House theme, she is very much the Diesel of the NXT women’s division. She has a long reign ahead of her, and likely won’t lose the title until WWE creative is ready to bring her to RAW or Smackdown.

While I don’t think the outcome is in question, this is one of the matches I’m looking forward to the most. I love Ember and I like Raquel too, and I think these two deliver a really strong match. 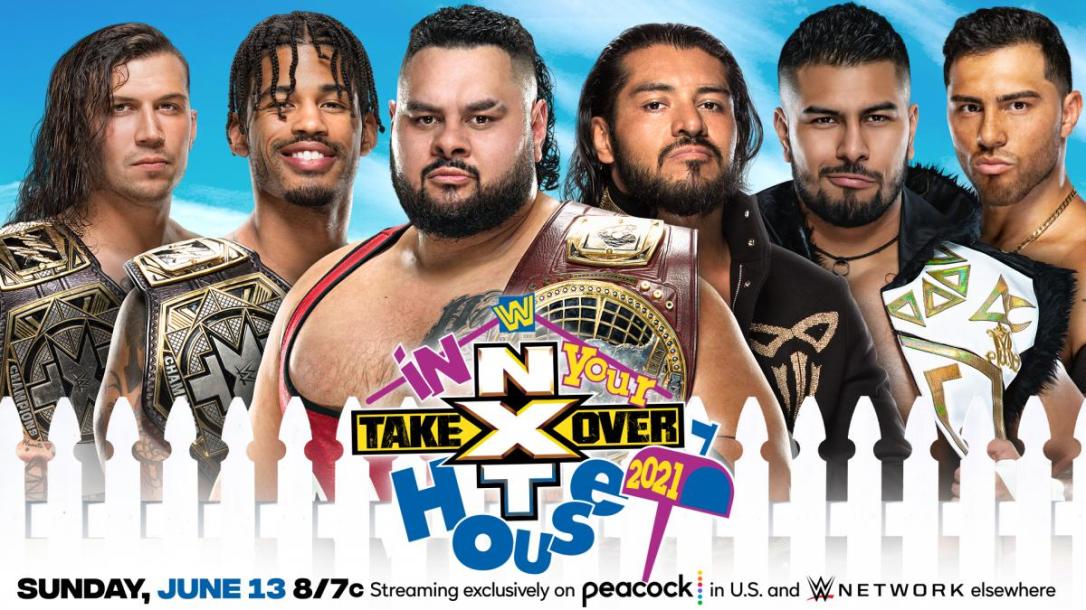 I get why a lot of people don’t like the stipulation, I really do. Normally I’m not big on it either, but I can make an exception. If you’re going to do a Winners Take All (aka Triple Header) match, then you absolutely do it at In Your House.

As a nine-year-old kid, I loved the third In Your House event, Triple Header. It was the one that featured WWF Champion Diesel and Intercontinental Champion Shawn Michaels taking on Tag Team Champions Yokozuna and Owen Hart (but mostly British Bulldog).

Here’s the minor problem I have with this match compared to that one though. In that match, each side had something to gain or lose. If Shawn or Diesel had got pinned, they would have lost their title (not both of them, just whoever lost). In this match, the faces have nothing to gain and everything to lose.

Considering Bronson Reed just won the title, and MSK is doing really well as tag champs, I can’t see them losing it.

The match itself will be entertaining and packed with action, but the outcome I don’t think is in question. 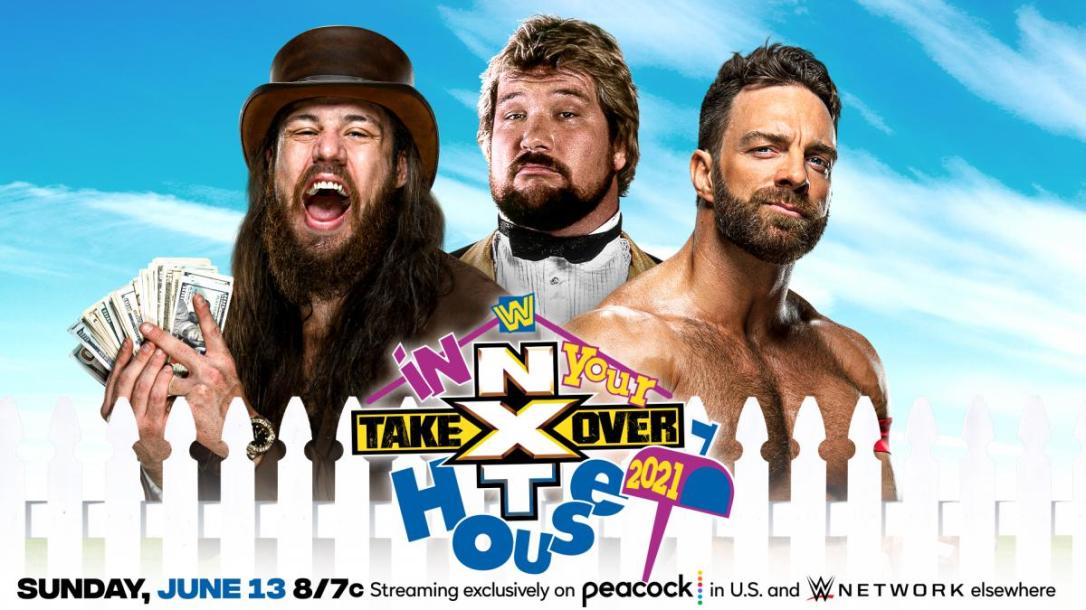 This is the match I’m most excited for. I’m a mark for the Million Dollar Man and always will be. It’s been great having Ted DiBiase back around, and frankly I hope he sticks around for a while. It’s time to bring back the Million Dollar Corporation.

I enjoy the character work of Cameron Grimes; he’s an entertaining dude and a pretty good wrestler. That said, the gimmick is running its course and it needs a change up.

LA Knight desperately needs a win, because NXT has done very little to make him appear a star. Knight has talked a good game, but in the ring has been a different story.

Of the two, LA Knight just makes the most sense to become the Million Dollar Champion. Hopefully he can be managed by DiBiase too; not because he needs a mouthpiece, but because I want Ted to hang around and I really want a stable.

I think Million Dollar Man heels it up and screws Cameron Grimes out of the championship, and hopefully somehow is revealed to have conned Grimes out of his money. In the short term, I’d like to see Grimes come out of this basically in debt to DiBiase and serve as the Virgil to LA Knight.

This match will deliver, in quality and entertainment value.

This is our only non-title match of the night, and one I believe will surprise people.

Mercedes is of course super talented, but Xia Li has greatly improved and is currently killing it with the new gimmick with the Tian Sha thing.

Xia is now a battle-hardened warrior on a quest to avenge her defeat four years ago at the Mae Young Classic. Has her brutal training and new found viciousness put her on the track to finally vanquish Mercedes Martinez?

Mercedes has a lot to offer NXT and her time will undoubtedly come, or at least it should, but right now this is all about getting Xia Li a big signature win. This is the elevation of Xia Li. If they continue to book her strongly, then a future match between Xia and Raquel will feel like a big deal.

This will be a hard hitting match that will be on the shorter side, compared to the others on the card, but one I think will be surprisingly good.

NXT In Your House airs tonight LIVE on Peacock and pay-per-view beginning at 7pm CT with a pre-show airing at 6:30pm.

Who do you think will win the matches tonight? Let us know your predictions in the comments below, or register in our integrated forums and discuss the show there.