Like Crimil’s Dagger that has been in the Banner pool for a while and was reissued last season, The Steady Hand is a 120rpm Aggressive Frame.

Back in the static rolls of Destiny 2’s launch, The Steady Hand featured your choice of Flared Magwell or Alloy Magazine and Outlaw.

It’s unfortunate that Iron Banner has such limited weapons and two of them are the same archetype of weapon.

Since they come from the same source and are the same type, you have to directly compare them.

Base stats wise, Crimil’s Dagger is better across the board. The Steady Hand has one higher stability (32) but in every other way it loses out to Crimil’s. Slightly worse aim assistance, inventory size, handling, reload speed, and recoil.

So it loses in base stats, but it does have some perks and combinations of perks that you can’t get on Crimil’s Dagger.

In my guide for Crimil’s Dagger (linked above) I listed the roll as Steadyhand, Flared Magwell, Outlaw and Timed Payload. Outlaw/Kill Clip also a fun roll.

Well The Steady Hand can’t have either of those rolls.

For PvE, I don’t think this gun is worth using or chasing a good roll for. Crimil’s Dagger and True Prophecy are better.

For PvP though, there are some combos I’m interested in. Again, this guide is more centered around the console or controller user.

With all that said, let’s get into what we should be looking for in The Steady Hand. 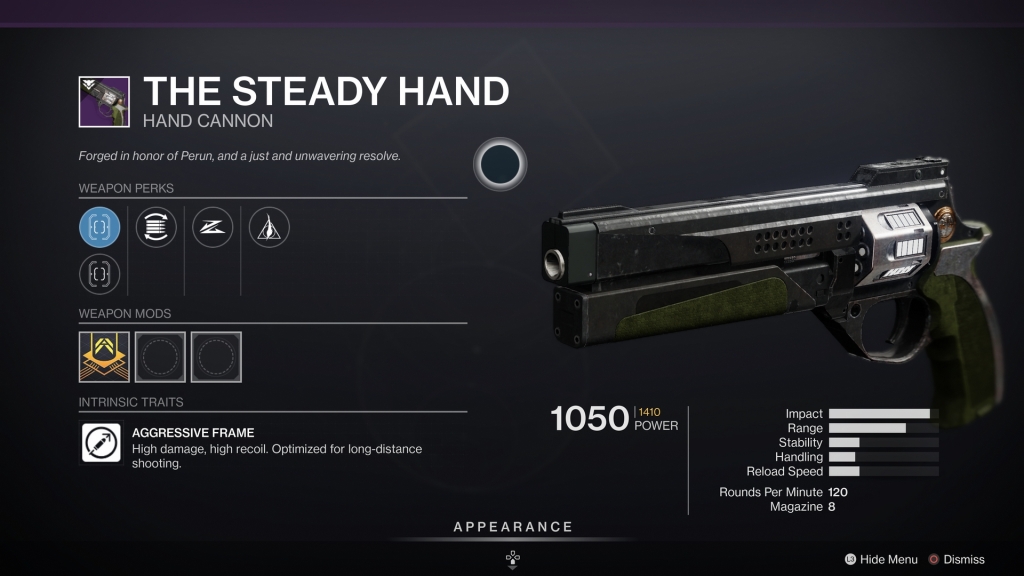 So what is the roll I’m looking for on console?

Between Moving Target and Zen Moment, I would prefer Moving Target. It doesn’t give a stability boost, but ups the target acquisition (aim assistance) and strafe speed.

I’m interested in trying Iron Grip just to see how it feels with the extra stability.

The Steady Hand has a base reload speed of 28, it’s about bottomed out as is so the -40 to reload speed isn’t a big deal but the +20 to stability should be noticeable and would pair well with either Moving Target or Zen Moment.

Swashbuckler because the extra damage is also nice, especially if you get a melee kill first to get it to the five stack.

Wellspring itself is a good perk, but I don’t think I’d care for it in PvP with this particular gun.

Mulligan could be a good choice given the gun only has a mag size of eight. But, when you’re in a duel with a weapon that already doesn’t have the best TTK, missing a shot and hoping to proc Mulligan means you’re probably going to die anyway.

The Steady Hand can also roll High Caliber Rounds, and while that’s good on controller I’ll always prefer Ricochet Rounds because it gives a boost to range and stability (stability being important on controllers).

All told though, this isn’t a weapon I would grind Iron Banner for. In the age of most weapons having been sunsetted, I don’t understand why they chose to bring back The Steady Hand while Crimil’s Dagger is still relevant. Finite Impactor, the IB hand cannon from Warmind, would’ve been a much better hand cannon to bring back or even something like Jorum’s Claw pulse rifle would’ve been better.

The first Iron Banner of the season goes live on December 8th, which should be an exciting and intriguing day. That’s the day the PS5 and Xbox Series X/S versions of Destiny 2 come out, which means an Iron Banner of folks playing at a wider FoV and at 60fps (or 120fps) against folks on PS5/One playing at the 72 FoV at 30fps.