There’s not much gameplay depth to ION LANDS narrative based adventure in a cyberpunk open world, but there’s a good story filled with conspiracy, hackers, and a rogue AI to unravel and explore to make up for it.

Originally released in April 2020 for PC, the “neon-noir story in a rain-drenched cyberpunk metropolis” Cloudpunk has finally made its way to consoles and the end result is mostly good.

If you’re eager for a cyberpunk open-world while you wait on the big hitter, Cloudpunk offers up a solid experience.

In Cloudpunk, you play as Rania, a woman new to the sprawling city of Nivalis on her first night as a driver for the titular Cloudpunk delivery company. It’s a company of questionable legality with a recent string of drivers “retiring.” Cloudpunk has but two rules; don’t miss a delivery and don’t ask whats in the package.

Rania will of course ask what’s in the package, and there are choices you can sometimes make regarding delivering the package or trashing it somewhere as Rania struggles with the morality of delivering these questionable packages in this city she doesn’t like.

Cloudpunk is a narrative game set in an open-world with limited gameplay. I don’t mean limited in that you’re mostly watching cutscenes, because that’s not here, but rather limited in that the only thing you can do is run around on foot or drive your flying car (the HOVA) to deliver packages from point A to point B.

It helps then that Nivalis is a decent sized city with a lot of verticality to it, and with that comes collectibles to acquire and plenty of interesting/funny/weird NPC’s to interact with. And while it’s not a puzzle game, sometimes figuring out how to get to where you need to can feel like a little puzzle.

As you deliver packages and discover locations, you’ll earn Lims. This is the currency of Nivalis. With Lims, you can buy food, drinks and other items. You have an apartment that you can buy decorations and appliances for. But the main use of Lims is for repairing your HOVA (because you will damage it) and buying fuel for your HOVA (which is a touch I like, I wish more games would have a fuel gauge instead of cars that don’t require gas). You can even buy upgrades and accessories for your HOVA.

You’ll spend most of your time flying your HOVA to get a package and then flying it somewhere else to deliver the package. All the while, trying to find where to park, and listening to dialogue from Rania, Camus (your car’s AI that you used to be your dog), Control (Cloudpunk dispatcher), and other characters (like the humorous private investigator straight out of a noir film Huxley).

Because you’re listening to the story and trying to piece things together, the voice acting is important here. At first I didn’t care for the monotone delivery of the Rania. It sounded like the voice actress was reading from a script instead of acting. Over time, it grew on me and I began to appreciate how the character was being voiced.

Some of it falls flat, like the voice acting for Camus, and others I enjoyed a great deal (like Control, who reminds me a ton of the YouTuber Undoomed, and Huxley, whose noir narrating was always a joy).

The soundtrack is also on point with the synth music that feels perfect for the cyberpunk, futuristic setting of Nivalis and helps feel in the moments when you’re flying around with no talking going on. 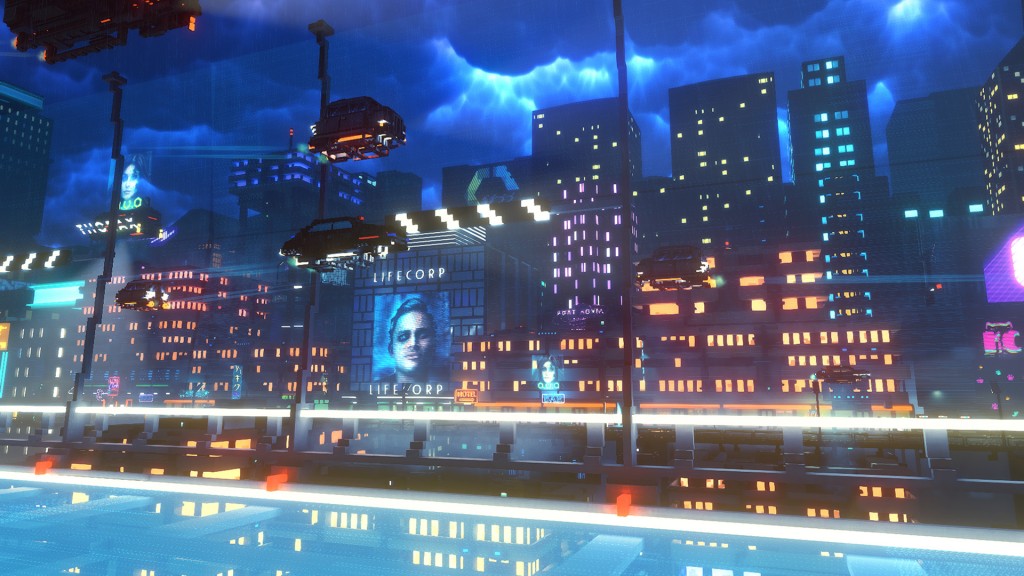 Cloudpunk sports a voxel art style that looks amazing, and combined with the well designed city and the lights/color palette you have a game that looks really good graphically. Even if it rains a little too much for my liking.

Having originally released for PC back in April, the console port here does have some issues. The main one, and most noticeable, is a stuttering/freezing after you fly into a different district and the camera spins back around. It’s jarring, and it does it every time.

Also, I find it a little disorienting when you park and your character is immediately standing far away from where you parked. For the most part though, it runs well.

Cloudpunk starts slow, but if you get interested in the narrative then you have a solid nine hours or more here. If you’re the type of the gamer who doesn’t care about story whatsoever and are purely gameplay focused, then I don’t think you find much value here because the driving isn’t terribly fun.

If you like the atmosphere and story, I think you’ll have some fun with Cloudpunk. I certainly have been.

Cloudpunk gets a three out of five: GOOD.

* Review code provided by the publisher for review.