Bungie, via Destiny franchise Director Luke Smith, has detailed some upcoming changes to the way the game’s Eververse (MTX) store this Fall with the release of Shadowkeep:

Like we did a few weeks ago on the Livestream, we’re going to continue to talk about how Destiny will continue to evolve this Fall and beyond. This update is about how we’re changing Eververse.

We’ve already made a number of changes to Eververse in Season of Opulence (we’ve redesigned the store, we’ve made Bright Engrams only include Year 1 gear—and have it bias heavily toward giving you items you haven’t unlocked in your Collections), and we’re going to make more changes to the economy, store, and armor in this fall’s patch.

It stinks to go to the Eververse store and see an item that looks cool and then seeing that the item has bad perks on it. In fact, when we’re setting up the armor, we’d twist ourselves up in knots to make sure the Eververse armor sets didn’t have good perks. We did this because we want the best way to get sweet perks on your armor to be by playing the game, not shopping for enhanced Hand Cannon loaders at Tess. The root cause (dating all the way back to Destiny 1) is that Eververse armor has always had perks/gameplay capability as a part of the package.

We’re done with that. As of this September, all Eververse armor is being converted into Universal Ornaments. These Universal Ornaments can be applied to all of the Legendary armor sets we’re releasing this Fall. They override the look of your equipped gear while preserving the perks, mods, and stats of the original item.

Any Eververse Armor you have acquired in your Collections will have its Universal Ornaments automatically unlocked for use on new Legendary armor. For example, if the song in your heart is to have your Titan roll with the 2018 Tin Man-esque Festival of the Lost Helmet, you can put it on any of the new Legendary armor coming to the game this fall. 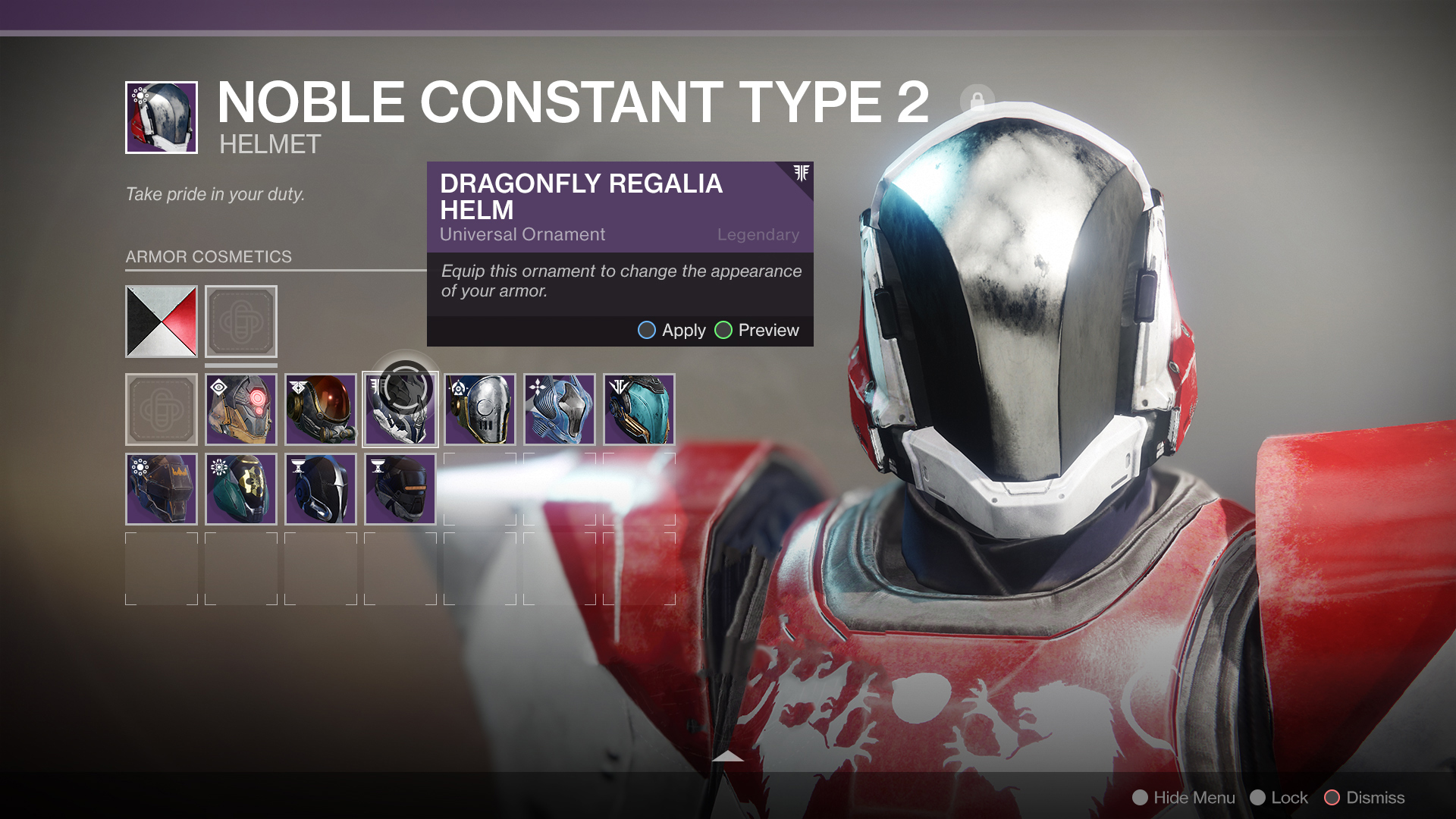 Historically, the best way to earn Bright Dust in Destiny 2 has been to buy a bunch of Bright Engrams, shard everything from the engrams, build a giant bankroll of Bright Dust and then spend it when the Warlock Dire Ahamkara helmet shows up the Bright Dust row in the last week of the season. We’re going to change this.

This Fall we’re changing Bright Dust from a pay- and/or play-to-earn currency to a play-to-earn reward. We’re adding Bright Dust as a reward for completing Vanguard, Crucible, and Gambit bounties. We want all players to earn Dust for playing, not for spending money and destroying a bunch of items in their inventory. After you complete all your bounties for the week, there will be an additional avenue to keep grinding out Bright Dust.

It’s also been pretty uncool to go to the Collection screen and spend Bright Dust to get shaders or Ghost Shells or whatever. We’re going to fix that too. Beginning September 17, Eververse items in your Collections will cost Glimmer and Legendary Shards. If you want to keep pulling out that Exotic Sparrow that looks like a motorcycle until you get the good Sparrow perk (Instant Summon), you can do that with Legendary Shards and Glimmer.

However, that means right now the absolute best thing you can do with all the Eververse items you don’t use regularly—armor, Sparrows, shaders, Ghost Shells, transmat effects—is dismantle them. Sitting on a pile of Midnight Talons or Metro Shift from your Year 1 stockpiles? Shard ’em for Dust.

That’s right! Everything must go—dismantle the extra stuff you have in your inventory, build up a huge amount of Bright Dust, and spend it on sweet stuff as it rolls through the Eververse store—because on September 17, everything changes.

Patriot’s Position: This SOUNDS like a great change. The armor being universal ornaments is a fantastic change and one that I’ve been hoping would happen since Destiny 1. It just made sense, because the armor looks cool (some times, some times it looks like hot garbage) but always had terrible perks that made it worthless.

I like earning Bright Dust through playing the game and not having to rely on a Bright Engram to dismantle something or that bounty note that you get from them. I also love that we won’t need to spend Bright Dust to pull these items out of our collections anymore, that’s always been a nuisance.

So I like all of this, but I’m also in wait and see and kind of doubting mode. The amount of Bright Dust we get from these bounties is going to have to be fair, otherwise we’re going to be taking a hit.

The skeptic in me says its a way to limit Bright Dust going forward, thus trying to get folks to spend more actual money on Silver. I would be inclined to do that occasionally, but not as long as I’m paying for expansions. If it were completely free all the way like Warframe, yeah I’d spend some money in their store. But not until then.

I want to give them the benefit of the doubt, but I just have that suspicion that come September we’re going to start seeing a lot of complaining about the change to how Bright Dust is earned.