Bound By Flame, the cross-generational RPG from French developing studio Spiders, gets the spotlight for being the first fantasy/action-RPG on PS4. Yes, it’s on PC, PS3, and Xbox 360, but those systems have plenty of action RPG’s (including Spiders own previous outings like Of Orcs and Men, and Mars: War Logs). For PS4 owners with that action itch, this is the only game in town at the moment. Luckily, it’s a very good game.

To set the stage, I generally play games on either hard (familiar IP’s or studios I know what to expect from) or normal. I started Bound By Flame on Hawk/Normal difficulty and struggled mightily. I made it past the first boss after dying a ton of times, only to hit the swamp and get slaughtered again and again. It got to the point where I went into the options and changed the difficulty down to Recruit/Easy. It made the game more enjoyable at the time because I was able to progress without dying constantly. Having said that, there were several areas where I still died quite a bit before finally getting past it.

Here’s the thing for most new players of this game; you’re probably going to be taken off guard by the difficulty and you’re going to blame the game. It’s frustrating. When I was playing on normal and dying over and over again, I was thinking the game was crap. It was difficult, but not on a skill level. Instead it felt cheap and unfair. Your weapons don’t do much damage, you die in a few hits, and you get ganged up on by enemies. And not just one type of enemy, but several different types. You may be thrusting daggers into a ghost like thing while you’re getting hit with arrows from a bow-wielding skeleton. And here comes a deadwalker with a magic sword that takes half your health if you get hit, and on top of that, here’s a sword swinging skeleton protected by a shield on front and back.

It gets to be overwhelming. Play the game on recruit and make it easier for yourself to start with. More importantly, you’re learning the games mechanics in an easier environment. My initial playthrough, I beat the game on easy in 10 hours and 37 minutes, doing sidequest that I didn’t have to go out of my way to do (a little over 20 of these). On my second playthrough, I beat the game on the hardest difficulty (Captain) and the majority of the sidequest, and beat it in just a couple of minutes over 10 hours.

I came out of that second playthrough with a much greater appreciation for the game. After switching to easy and finishing the game, I genuinely enjoyed the title. But my second run was so much more enjoyable. I was dead wrong about the game and its combat from my initial impressions, and I can’t help but wonder if some of the more negative reviews out there that mentioned the combat and difficulty just didn’t give it the chance it deserved. Because there’s nothing cheap about the combat; it’s very much skill based.

When the combat clicks for you, and you start clearing areas of enemies on Captain difficulty without getting touched you’ll find that it is extremely satisfying. My second run I utilized the daggers almost exclusively and I loved it. There’s something about just mercilessly pounding some enemy with flaming daggers while dodging every attack getting thrown at you that makes you feel like a badass in the game.

Bound By Flame has three combat “classes” that you can skill up and switch between at will: Warrior (sword, axe, warhammer), Rouge (daggers, stealth), and Pyromancer (fire based magic). I went Warrior first time and fully maxed it out, but maxed out Rouge my second playthrough and enjoyed it more thanks to the dodge mechanic. Of course you’ll want to put a couple of points into Warrior anyway as you’ll have to switch to that stance to take down the shielded guys (although you can take them down with daggers, it’s just easier with a sword). In addition to those three skill trees, there’s also a feats (perks) feature that allows you to invest points into things like increased health, mania, experience points gained, more damage, etc.

The game also features a crafting system and modifications for you weapons and gear. As you kill enemies and open crates you’ll be looting different types of resources. You can use these to make mods for you weapons and gear (which not only changes certain attributes but also appearance), and make items like health potions and arrows for your crossbow. You can visit merchants and sell any weapons, gear, items that you don’t need. Health potions require “tainted blood” to craft, but if you’re in battle and find yourself in trouble and have no health potions or tainted blood, you can actually use your gold to craft the tainted blood. On my first playthrough at the final boss, which is a challenge unless you use your bow, I had over 16,000 gold and used almost all of it to as much tainted blood as I could. I used that blood to end up with around 100 health potions. So you can abuse that system some provided you have the gold.

Now this is a budget title at $49.99 (PS4) and $39.99 on other systems, but even still I would expect just a tad more from a RPG. I don’t think you should be able to beat an RPG in a day; but both times I beat it in just over 10 hours. The second time I did many sidequests. Of course I suppose that makes it easier to do repeat playthroughs, although sadly there is no NG+ or end game content.

Bound By Flame features a semi-cel-shaded art style. It isn’t great looking by any stretch of the imagination, but I think the game looks good enough (I’m more gameplay over graphics anyway). The game has an unlocked framerate from 30-60fps, which is sure to make some cringe because they want things locked. It works. The framerate isn’t jumping. Focus Home says the framerate is at 60fps during “tranquil scenes/areas” and 30fps during bigger scenes/large combat. I didn’t notice anything negative in this regard; for me, the game ran smooth and more importantly I didn’t notice any screen tearing.

That’s not to say the game doesn’t have its share of bugs and glitches. You can control the camera with the right thumbstick, but I often found it get a bit janky if you got backed into a wall and a few times got in the way during more hectic combat. Even worse, there were numerous occurrences where I would have to enter combat without a companion because the companion had gotten stuck somewhere (even in the middle of water in the swamp) and the only way to get them back was to enter an area that would trigger a loading screen. Now with the exception of one or two companions, your partners don’t do much anyway, but even still they often provide a needed distraction  so that you aren’t ganged up on by all the enemies.

In another instance, the voice over audio dropped out. So while the game is good from a technical point with the frames and screen tearing, there are some complaints with bugs. 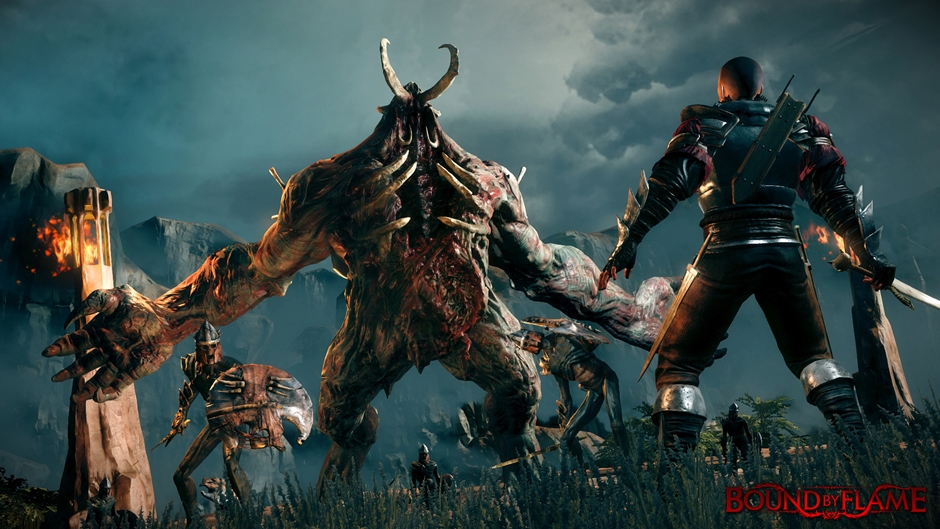 After over 20 hours through two playthroughs (one at each end of the difficulty choice) I can say that I thoroughly enjoyed my time with Bound By Flame. In fact, I’m not even done with it. I have a third game going now and I’m working on getting the platinum trophy. There’s a certain charm to the game. The team at Spiders should be proud; they’ve crafted a fun and ultimately good RPG. It’s a solid outing and foundation, and I look forward to seeing how Spiders can take all the positives of Bound By Flame and apply it to their next game (I honestly wouldn’t mind a sequel).

If you own a PS4 and are looking to scratch an RPG itch, then you should definitely consider picking up Bound By Flame. It’s not going to be for everyone, lord knows its gotten plenty of hate from folks (be it other reviewers or people bashing it in streams when they’ve never played it), but I enjoyed the hell out of it. I liked it during my first playthrough, and my second one made me appreciate it so much more.

Bound By Flame gets a three out of five: GOOD.