The History Channel miniseries “The Vikings” premieres this Sunday night, and since I’m actually looking forward to it (along with “The Bible”) this CCW felt like the perfect time for an epic that I hadn’t seen before for with the same name. Luckily, Amazon Instant Prime has this 1958 “epic” available for free streaming for Prime members.

The Vikings is the tale of two half-brothers who don’t know that they’re half-brothers, both sons of the Viking King Ragnar. Ragnar led a raid of the English land of Northumbria, and there he killed the King of Northumbria. He also had his way with the Queen. With no heir to the throne, the King’s cousin, Aella (Frank Thring) takes the throne. The former Queen knows what her cousin-in-law would do to her half-Viking child, so she hides him and ships him off to Italy. As luck would have it, the ship carrying the infant is captured by the Vikings and thus the boy is made a Viking slave because the Vikings have no idea about his royal kinship.

As a man, the slave, now known as Erik (Tony Curtis), has a run-in with his unknown brother-in-law Einar (Kirk Douglas) who accuses him of having stolen a hunting hawk. Erik, who didn’t steal the hawk, orders the hawk to attack Einar. In the process, Einar’s face is gashed and he loses sight in one eye (which is murky white). Erik is sentenced to die by drowning in the rising tide. Fortunately for Erik, an English nobleman named Lord Egbert (James Donald), who opposes King Aella, recognizes the pendant that was around Erik’s neck as being the royal sword’s pommel stone that was placed on Erik’s neck as an infant by his mother. Erik survives the rising tide and becomes the “slave” of Lord Egbert.

Erik and Einar do not like each other, at all. The dislike the two men share for one another heats up when Einar and some other Vikings kidnap Princess Morgana (Janet Leigh), who was scheduled to marry King Aella. Einar falls for the Princess, and Ragnar tells him that he can have her. Of course just as he gets her, here comes Erik to knock him out and take Morgana to a boat where they flee the Vikings with some friends of Erik’s and Moragana’s maid. During this voyage, Morgana falls in love with Erik, and he falls in love with her as well. 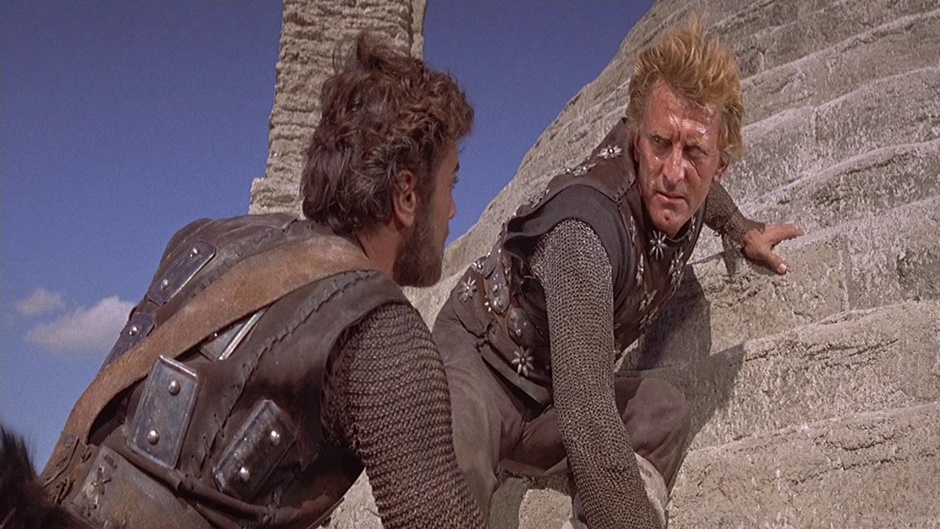 Einar is not pleased when he wakes up, after all his prize has just been taking from him. So he and Ragnar gather the troops and head out on their own boats to chase them down. During this chase, Ragnar’s ship crashes into a rock (because it’s super foggy) and sinks. Einar believes his father has died, so he decides to abandon the pursuit. But Ragnar isn’t dead; he has been rescued by Erik and they go to Northumbria. There, King Atella orders Ragnar to be bound and tossed into a pit with a bunch of wolves. Erik honors the request of his father, whom he doesn’t know is his father, to cut him free and give him a sword so that he can enter Valhalla. Free from his binds and with sword in hand, King Ragnar jumps into the wolf pit where he dies.

Because of his actions towards Ragnar, Erik’s hand is chopped off by King Atella and he’s put on a boat and sent adrift. He ends up back with the Vikings, who are planning an invasion of Northumbria. Erik informs Einar of how his father truly died. Finally, the two half-brothers, who still don’t know they’re related, put aside their differences and agree to travel to Northumbria and spill some English blood. Once there though, they’re going to go right back to hating each other.

Eventually, Einar makes his way to Morgana. Morgana informs him that she doesn’t love him, but instead she loves Erik. Einar isn’t pleased, and he drags her outside as he calls for Erik to come do battle. Morgana knows the two are half-brothers, and she tells Einar, but of course he refuses to believe her. Finally, Erik and Einar do battle atop a tower and the movie ends shortly after Erik kills Einar and gives him a Viking funeral.

I typically like the so-called epics, but this one is just decent to moderately good to me. After all the positive reviews, and the cast, I was expecting something great. It’s not, in fact it’s barely good at best (and that’s when in a generous mood). I can appreciate it for what was during its time; after all the production here is really great. A lot of the action scenes and stunts are also great, as is the score. But the story, and the sadly the acting a lot of the time, is subpar.

The only character remotely interesting was Erik. To be the star of the movie, Kirk Douglas’ Einar had zero redeeming qualities and I found myself rooting for his death literally minutes after first seeing the character. In fact, the best thing about this movie is that Douglas dies at the end; I would have been greatly disappointed had he lived.

In the end, I got some enjoyment out of this but not nearly as much as I expected going into it. I was actually disappointed with a lack of action (save for the end and a few other portions here and there), and with how non-interesting the story was. Sorry, but two guys falling in “love” with a chick they just met and fighting to win her isn’t a good story to me and I don’t care if they’re brothers or not.

For free, it’s worth a watch, but it’s not a movie I’ll be watching again or adding to the old DVD collection.

The Vikings gets a two out of five: DECENT.