About this time a year ago I penned my review of the original Expendables movie. I am tempted to simply copy and paste it here while just adding a ‘two’ to the end of the title and maybe make some other slight changes and be done with it, but on second thought this movie does deserve a slightly more thorough job than the likes of that.

It’s not that the story, thin and paperlike as ever here is any better than that of the original movie, in fact you could argue the plot here is even simpler than that of the first. Not that there’s anything wrong with that. This is one of those movies where you don’t want too complicated of a plot getting in the way of the great fun that is the many action set pieces. There are many obvious set ups here that you can see coming a mile away.

For starters, early on we have a scene where the movie obviously attempts to build sympathy for a character by having him tell us all about his lovely fiancee and how he is to retire from the mercenary business (after one more mission) and go back home to said sweetie and live out the rest of his picturesque life in relative peace and quiet.

Hell, he might as well have just put a bullseye on his chest and picked up a megaphone and started signaling that it was now time for the bad guys to come and kill him lickity split. That said, the simple, predictable plot here is preferable to trying to orchestrate something too “contrived” that would just get in the way of the action. 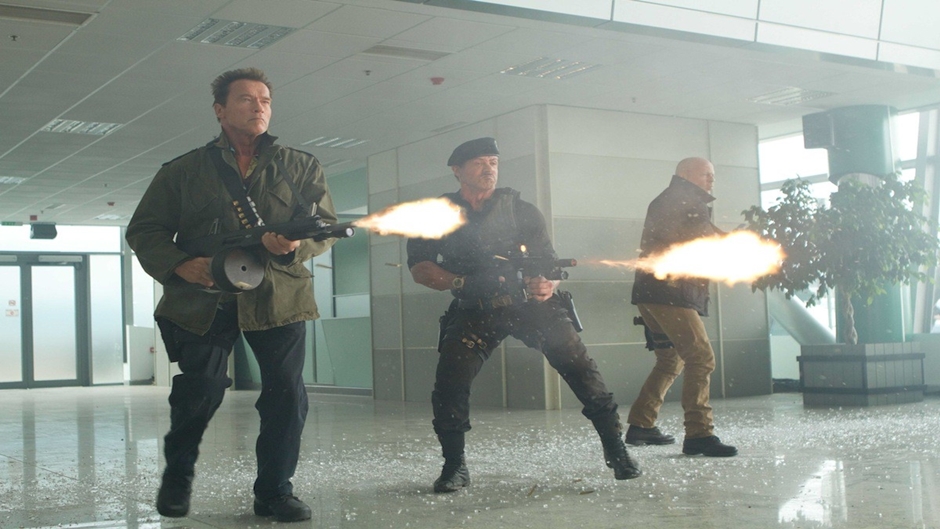 This was one of the slight criticisms I had of the last movie, in that there were a few poorly developed subplots that didn’t really connect with me like the daughter of the general and all that hoopla. Here though, the story is as dead simple as it can be.

Stallone and his crew of misfits get sent on a mission by Mr. Church (Bruce Willis), which goes swimmingly until one of their own is killed (you’ll never guess which one) in an ambush by a big clan of baddies, lead by none other than Jean f’n Claude f’n Van f’n Damme! And so with that established, the mission from here on out is simple, as stated by Sly’s character while burying their fallen comrade. “Track em’. Hunt em. Kill em.”

Now of course, the main drawing point of this movie is the same as it was the last time. That being, the many, many megastars of the past all assembled into one great big brewing pot of badassedry, kicking ass and taking names like there’s no tomorrow.

All of the old gang from last time are here, plus tons more. Stallone again plays Barney Ross, and Jason Statham is back as Sly’s right hand man, Lee Christmas, as are Randy Couture, Terry Crews, Dolph Lundgren and Jet Li in their respective roles. Arnold Schwarzenegger and Bruce Willis who had only brief cameo appearances last time get way more screen time here, including taking a big part in the final gunfight with Van Damme’s henchmen at the close of the movie. And yes, Chuck Norris is here for a few priceless cameo moments as well, always introduced with that classic Eastwood whistling music from the Good, the Bad, and the Ugly to boot. He even gets to rattle off a ‘Chuck Norris joke’ in the movie at one point.

The only one missing entirely is Mickey Rourke, who had a small but fun role in the last film but here is nowhere to be found. Jet Li fans take note here, as Li is present for the opening mission/ action montage but then once that is done with he parachutes off with some foreign dignitary, not to be seen again for the rest of the picture. He is replaced with a lovely young Asian gal, though, who is assigned to the team by Church to help them do some high tech computer wizadry stuff they’ll need in order to complete the mission he assigns to them originally. 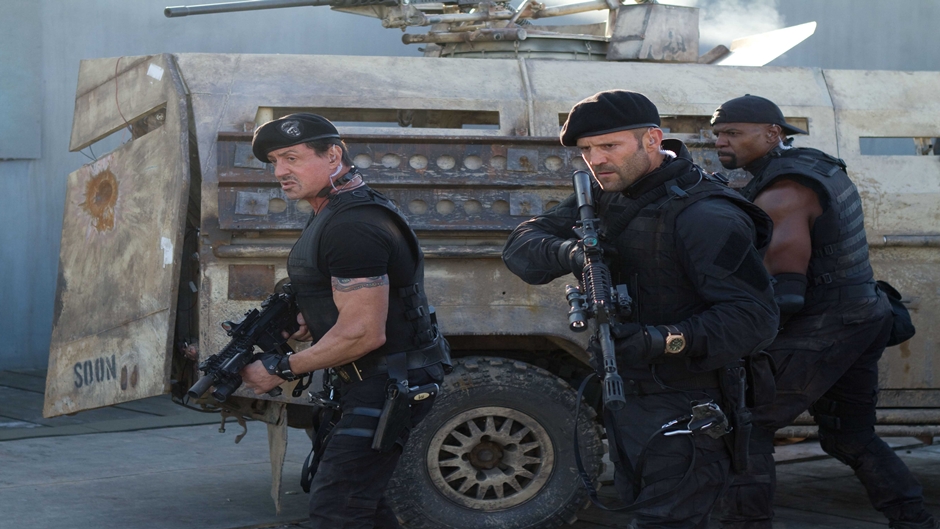 The real meat of this movie is the action sequences, and rest assured they are all very well done as you’d expect. Heads explode on impact after being hit with rounds fired with 50 caliber sniper rifles. Tanks are destroyed and an almost endless supply of bodies are mowed down like so much freshly cut grass. There’s lots of great hand to hand combat as well with Statham and Van Damme bringing out their usual assortment of martial arts fury.

All in all, you really can’t go wrong here if you, like me, grew up on this kind of stuff from back in the day before all these guys became “old hat” so to speak. The movie is intended solely as an homage and a tribute to that era in time where each of these guys were the sole stars of numerous blockbusters, and I’d say it more than lives up to the task of being just that.

Big time blockbuster movie sequels are hit and miss sometimes… but this one is definitely a hit I’d say. It delivers all of the great action of the first movie, and then some, and also you have basically everybody this side of Steven Segal (who hopefully will be the bad guy in the third movie) who’s ever been in an action movie in the past three decades here having a good time doing what they do best. Blowing shit up!

There were many scenes in this movie that I can’t wait to go back and watch a second time just to enjoy them all over again. To me, that is the sign that a movie has done its job very well.

If you’re looking for something to broaden your mind or help you to better appreciate the workings of the human soul, then you should probably have stopped reading this review a long, long time ago.

But, if you’re just looking for a good time to be had, and a nice “turn your brain off” kind of movie that is action packed fun from beginning to end, then this is the movie for you. Yippe-ki-yay mothertruckers. And, I’ll be back.

The Expendables 2 gets a three out of five: GOOD.

1 thought on “The Expendables 2 Review”