This review is for the PC version of Darksiders II, and as such I’m going to spend the first portion of this review talking about the problems I’ve had with the PC version. Darksiders II was very obviously designed with a controller in mind; it’s not at all keyboard and mouse friendly. I don’t do a ton of PC gaming, especially new games, so I don’t have a gamepad or a 360 controller to plug in, and thus I’ve experienced a number of frustrating things while playing Darksiders II.

My biggest complaint is that the camera sucks and often seems like its fighting you. This is often most problematic in areas with a lot of enemies to fight and some challenging boss fights, but the wonky camera can even make routine wall jumping (I’m talking straight up) and aiming a tad annoying at times. And it certainly doesn’t help the camera problems any when the controls using a keyboard are difficult to use to the games fullest.

For example, in some tough spots you might feel like the best option would be to focus on an particular enemy (holding Shift), run towards it (holding W), all while pressing Alt and clicking away on your mouse to attack. But Shift+W+Alt isn’t a natural combination and certainly not something that’s easy to do in a heated battle and while dealing with camera issues.

Another thing about the PC version that I have to mention is that it looks the same as its console counterparts. This game doesn’t, at least at the moment, take advantage of superior PC graphical features. Outside of changing your resolution, there are no graphical options and with no mod support either, there’s really no reason to buy Darksiders II for PC over a console version unless you’re a PC gamer only who doesn’t own an Xbox 360 or a Playstation 3.

You’re simply not getting the best out of a PC or a game that looks better than the console versions. Now it’s important to point out that the game still looks great, but I do know some PC gamers think that PC games are so ahead graphically that console games look horrible. This is a console port.

Darksiders II also has its fair share of bugs, glitches, and quirks, but these have all been minor enough for me personally that they’re not going to affect the final score much at all. I’ve had buttons not work until having been pressed multiple times, Death has gotten quasi-stuck on a wall for a few seconds when climbing, and enemies have clipped through walls and come back out.

One frustrating, yet possibly a blessing, glitch occurred during a tough battle where you have to kill six Construct Sentinels, the last of which brings out two big Construct Champions. I had died several times at this point, but finally got to this exact spot with a couple of heath potions left and used Reaper form to do some heavy damage to the Champions.

Well Death got stuck in Reaper form and I wasn’t able to attack using standard means, he was just floating around in his big Reaper form. Luckily you don’t take a lot of damage in Reaper form, so I was able to absorb the Champions hits and use my health potions when necessary. I was able to defeat the Champions in this form using the Harvest ability, but had I not had a few Wrath potions, I wouldn’t have been able to do it.

Once the Champions were dead and the gate opened, Death went back to his normal self and I was once again able to run and attack. The game has also crashed multiple tmes.

By this point, it probably seems like I’m ragging on the game. But don’t mistake any of the above flaws, this is still a great game that has a ton to offer and is very fun to play. Sure, I’d recommend the console versions, and personally plan on buying the PS3 version, but if PC is the only way you go then definitely still get the game.

It’s a challenging game, and even more challenging on the PC (granted in the worst way since you’re battling the controls and camera too unless you have a gamepad), but it’s rewarding as well and not unforgiving. You will eventually get used to the PC quirks, and while still frustrating, will become less so and may even make you apply a little more careful thinking and planning instead of jumping head first into a battle and spamming the attack and jump buttons.

As far as gameplay is concerned, Darksiders II isn’t innovating. There’s a mash of concepts and styles from other games that come across as homage and using what works. And for the record, that’s not a complaint against the game. Darksiders II is extremely fun and the mixing of things we’ve seen before is very well done. Where else are you going to see inspiration from the likes of Zelda, God of War, Prince of Persia (2008), Diablo, Portal, and Shadow of the Colossus?

While the game may be full of stuff we’ve seen and done before, Darksiders II puts it all together in a highly entertaining package that will keep you coming back even after you wrap up the game’s lengthy 20+ hour main quest (full disclosure, I have not beaten the game at the time of this review, but it’s not like the gameplay is going to drastically change near the end of the game).

Where Darksiders II truly excels is in the level design. Darksiders II contains multiple worlds, each are rather large and generally open. While quests themselves are fairly lengthy and follow a specific formula (dungeon puzzle, battles, puzzle, boss), each world is big and open allowing for you to venture off from the main quest and take on side quests (there’s about 20) and hunt for loot and collectibles (as well as battle grinding to help you level up).

The dungeons and levels are really well designed. These dungeons can be multilayered and full of treasure chests, and usually involve a healthy amount of platforming, puzzle solving, and battling. While the puzzles and general navigation of the levels aren’t too difficult, there are plenty of spots where you’re going to be looking around trying to see what you’re missing and generally scratching your head for a little while.

Generally, the main head scratching moments are going to have you asking the questions “what can I climb?,” and “can I wall run/jump to get where I need to go?” However, sometimes you’re going to have to look deeper. In some areas, you’re going to need to dive under water and swim through a hidden passage.

Puzzles themselves usually involve blowing open a path to something, rolling an orb into a hole, standing on a pressure plate, etc. Standard stuff, but Darksiders II does this kind of thing pretty well. You’ll gain new abilities as you play through the game, such as the a grapple hook ability, create duplicates of yourself, and there’s even some Portal inspired fun with portals.

Combat in Darksiders II is pretty straightforward. If you’ve played God of War or any hack-and-slash game, you’ll feel right at home with Darksiders II. Your basic attack comes from dual scythes, but you’ll have plenty of customization for secondary weapons in big swords, maces, hammers, axes, etc. You’ll even get a pistol that comes in handy and you’ll have to use often. In addition, as you level up you earn skill points that you can apply to a fairly big skill tree that will allow you to do special moves like teleport and harvest, and even summon creatures to fight with you.

The story of Darksiders II is fine, and you don’t need to have played the first game to understand and enjoy this one. In the first game, you played as War and ended up destroying humanity. This time around, you play as War’s brother Death, on a quest to clear his brother’s name and restore humanity. It’s not that simple of course, and the first several hours of the game the story will really drag and almost be non-existent as you do one quest after another for the very large Maker’s.

Darksiders II is packed with content and offers a ton of replayability. As already mentioned, the main quest should take over 20 hours to complete, and there’s a nice amount of side quests in the game and some collectibles. The game is also filled with loot. While the loot isn’t on the level of something like Diablo III, you are accumulating lots and lots of loot. Most enemies will drop gold coins that you can use to purchase new equipment, health potions, weapons, and armor. In addition, there are treasure chests all over the place waiting to be found and opened.

You may find a dungeon map, you may get some sweet weapons or armor, but more than likely you’re going to get gold coins. Lots and lots of gold coins. Thankfully, Darksiders II doesn’t borrow from the Elder Scrolls or Fallout. You’re not going to become over-encumbered and slowed to a crawl from all the loot, although you’ll definitely want to fast travel around and sell it.

The game is also sporting a battle arena called The Crucible. Here, Death can enter an arena and fight wave after wave of enemies (ever more challenging). There are 100 waves to fight through, and there’s a risk/reward system in place. After every five waves, you’re given option of whether or not you wish to take a prize and leave the Crucible, or forfeit your prize and continue fighting for a chance at an even better one. Become Death, and fight your way through all 100 waves to claim the ultimate prize. 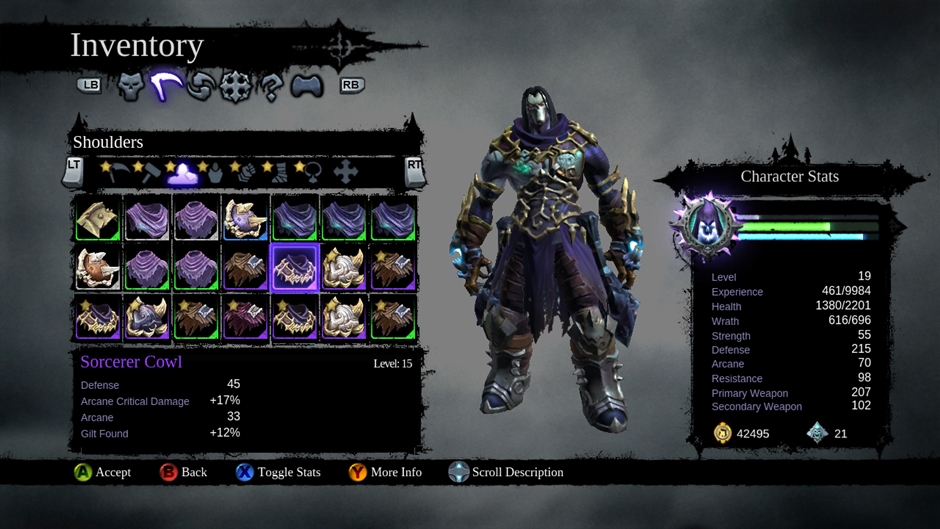 Now trying to go through all 100 waves of the Crucible will probably prove challenging enough for most people, but the game has more replay to offer. Once you beat the game, you’ll get the option for a New Game + mode, which is where you can replay through the game again while getting to keep your stats and skills from your previous game.

There’s also a mode for the truly insane and those seeking the ultimate Darksiders challenge… Yes, I’m talking about a perma-death mode called Nightmare. Die in Nightmare mode, and it’s game over. Die at the end of the game? Ha, back to the beginning for you.

Darksiders II is a game with flaws, it’s obviously far from perfect. However, the game has a distinct charm to it and is ultimately way more fun than it ever is frustrating. Its issues never amount to more than slight annoyances, although they are abundant enough to knock the game down from the superb status it was flirting with it.

Overall, Darksiders II is a very easy game to fully recommend across all platforms, even though this seems a clear case where console is probably the better choice unless you have a gamepad. The game has some fantastic level designs and the dark and dreary atmosphere is full of bright colors that contribute to some great visuals.

Darksiders II gets a three out of five: GOOD.