Sony’s MLB: The Show series is widely regarded as the best sports game on the market, something Sony obviously takes to heart since right on the cover you’ll see “#1 Rated Sports Game, 4 Years in a Row!” With opening day of a new season of baseball less than a month away, The Show is back for the 2012 season and faces the same question all yearly sports titles are faced: is it worth spending another $60 on. Fortunately for Sony, the best has gotten better and for most fans they’ll want to upgrade.

The Show 12 is packing some improved graphics and, on the PS3 version, all new TruBroadcast presentation that makes the game extremely realistic. They say it’s “so real, it’s unreal” and that isn’t just marketing hype. This is the most detailed and authentic looking sports game available on consoles with the only thing that comes close is 2K’s NBA franchise. And it’s not just the camera angles and pretty graphics that make it realistic. The player animations are fantastic and the players themselves ripe with emotions in their facial expressions, the sounds of the game are outstanding and can easily fool a passer-by into thinking you’re watching a baseball game, and both versions of the game feature new True Ball Physics that Sony deems “ultra-realistic” (and they’re not lying). In short, the game is truly in a league of its own when it comes to presenting a realistic sports experience.

The game’s not just a pretty package though. There’s a ton of material here to create the deepest baseball game available, complete with play options to fit any kind of player. Outside of the standard exhibition Play Now mode, where you pick any team and play any team in any stadium, MLB 12: The Show has three deep modes returning from the previous iterations (Road to the Show, Franchise, and Season), and introduces an all new mode called Diamond Dynasty.

You can customize the settings for each mode individually, and there’s a plethora of customization options for to choose for. For instance, I prefer to use the all new Pulse Pitching mechanic (you press the X button when a pulsing circle is at its smallest point, which once you get good at it will make your pitches quite accurate), but there are options there for people who prefer using a meter, analog pitching, or prefer the classic method of simply pressing a button to pitch. You can even change the pitching difficulty for each of these, as well as camera angles when pitching (I use broadcast, which puts the camera behind and to the side of the pitcher, like you’d see on a real game). 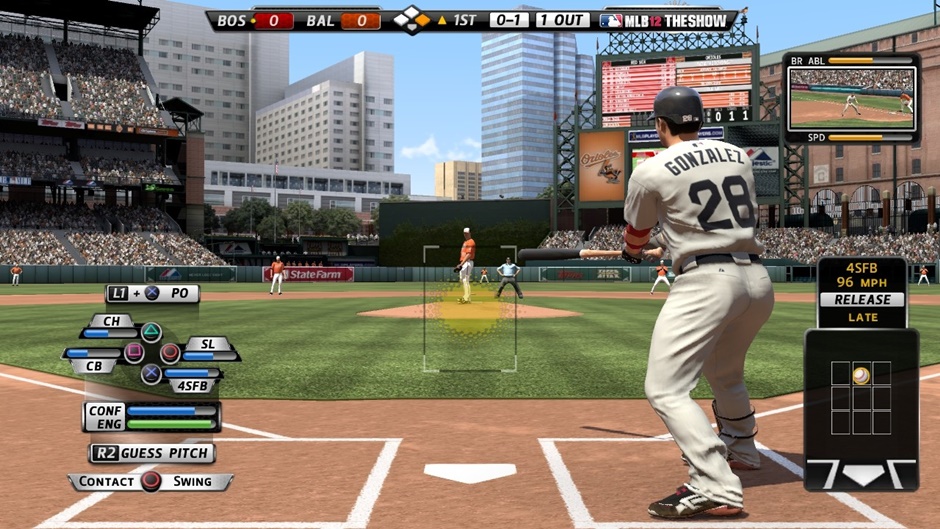 The same is true with batting. I started out using classic batting. You time the ball and just press a button and hope for the best. Now I use zone timing; you still press a button at the right time, but you control your aim with the left analog stick. I find this option the best because I prefer the relative simplicity of classic batting, but prefer to control exactly where I’m swinging since there were times I’d have perfect timing but swing over a ball when having no control over it. There’s also the analog option for batting, but that’s not for me as I prefer to simply press a button. The important thing is, the game includes all the options for you to control how you bat and pitch to fit your play-style. And I’d be remissed not to mention that you can do everything (batting, pitching, fielding, and running) with the Playstation Move, but I don’t have one of those so I couldn’t try those options.

Now to get back to the modes, the one I’ve spent the most time with is Road to the Show. Here you pick a team, or get drafted, and start playing on that franchise’s Double A team. I chose to be a left-fielder signed by the Atlanta Braves, so I started with the Mississippi Braves. As you play games, you earn training points (XP if you prefer) to use towards increasing your players stats for a given category (and there’s a good many within hitting, fielding, and base-running). You also have training days that pop up where you’ll have to reach a certain number of successes within a given amount of chances (such has hit 10 balls thrown as strikes in 20 chances).

Succeed in these trainings and the next time one like it comes up, it’ll be a higher level challenge. You earn training points doing these training events as well. Your player also has Advancement Goals, a list of four items within a given amount of series where achieving the goals will help you advance through the franchise. These can be challenging and out of your reach, such as the goal of hitting three or four home-runs in the next four series’s.

I was doing quite well with the Mississippi Braves, but the Braves organization decided to trade me away to Baltimore. So then I was playing for their AA team, and then got called up to their Triple A team. Finally, I was called up to the main roster to play for the Baltimore Orioles to start the 2013 season (so I spent one year in the minor). Currently, a few weeks into the start of the 2013 season, my role on the team is that of sitting on the bench and coming in to pinch hit (though I have started one game). I’ll have to work my way up to being a starter. 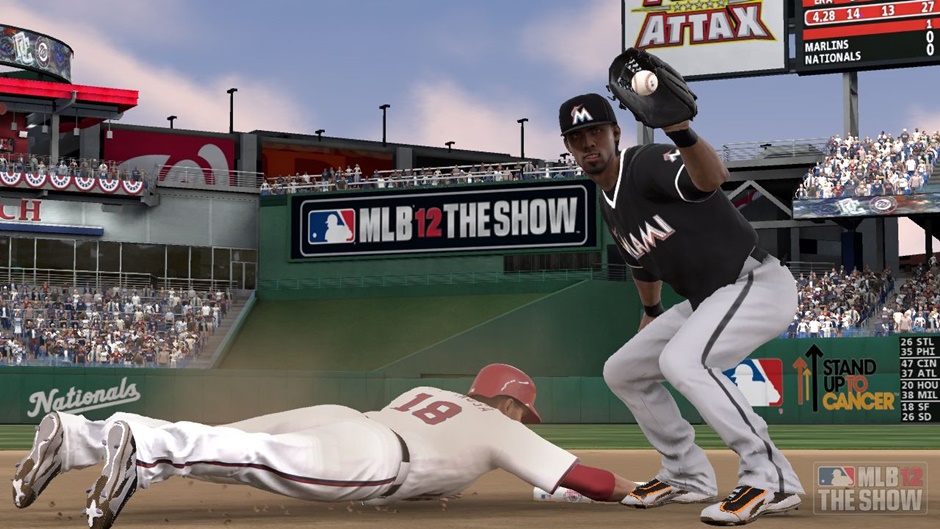 Games tend to go by fast in this mode, as you only see/play parts of the game that involve you. So unless you’re pitching, you won’t see every single defensive play… only if the ball is going to possibly be coming towards you. You only see batting when you’re at the plate or when you get a hit and you have to run the bases. All in all, Road to the Show is an excellent career mode and probably the mode that will keep me coming back the most.

Franchise and Season are largely the same except Franchise is a lot more in depth as you are basically the general manager of the franchise which includes the minor leagues. Franchise includes the minor leagues and general management simming with setting prices and whatnot, and it’s quite in depth. This mode is perfect for people who want a really strong baseball management simulator. Personally, I prefer the more simplistic Season mode which does give you management options (call players up, release them, initiate trades, etc.), but isn’t as detailed as its Franchise counterpart. You don’t need to to worry about setting prices for admissions and concession stands and whatnot in Season. Having said that I prefer Season, I am and will be maintaining teams in both modes (Atlanta Braves in Franchise, and Miami Marlins in Season).

The new game mode, Diamond Dynasty, is a baseball take on what EA Sports first implemented in Madden with Ultimate Team and they’ve carried over to other titles. You purchase packs of cards, using either real money or money earned playing the mode, and they do have MLB packs that contain real players available for purchase. This is the only mode where you create your own team (mine is the Alabama Jeffersonians, as in Thomas Jefferson… be warned, every good name is taken as I tried at least 20 to no avail). You can create your own logo, design your uniforms, make out your line up, and then control your team against MLB teams controlled by the CPU or battle with other made up teams controlled by real players online. There’s elements of Road to the Show here, as the Dynasty players (the players that aren’t real MLB players) will need to be trained (and leveled-up so-to-speak). You can even put your cards on the market for other real players to purchase. If you’ve ever played around with Madden’s Ultimate Team, then you have an idea of what to expect with MLB’s Diamond Dynasty card game (although Diamond Dynasty is more in-depth and requires some management to be successful). 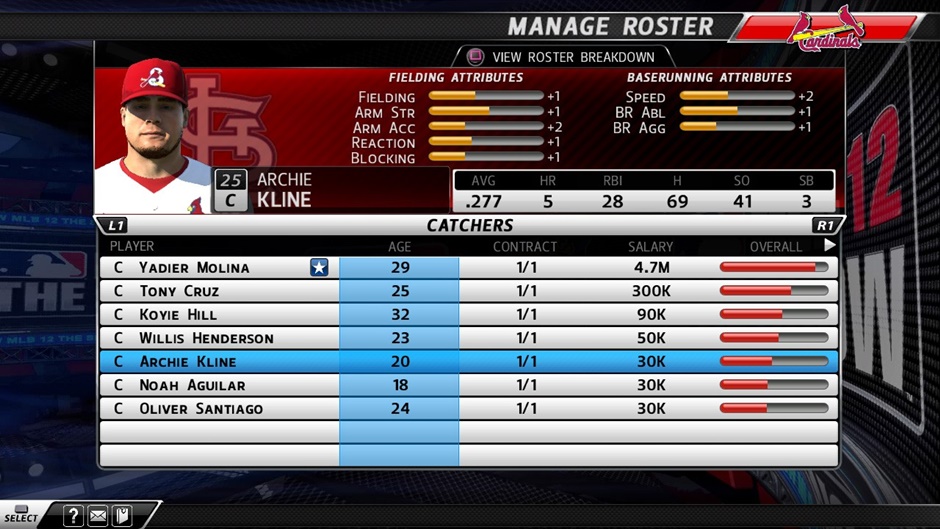 I have not played a game online against another person for a couple of reasons. The biggest reason is simply because it says I’ve lost my connection to the network way too much (and that’s their end, not my end), and the second reason is this game requires good timing to hit and pitch and that’s not going to translate well online with lag (especially when I can’t even keep a connection to the network while online doing something that isn’t even playing against another person; Challenge of the Week and Diamond Dynasty versus the CPU for example). For that reason, I’m not really factoring online play into this review. If you’re a competitive fan of the series, the game is probably as you would be used to and expect, but online baseball just isn’t something I care to do. I like shooters and action games online, I do not enjoy trying to play sports games online especially against random people (too many people quit).

Earlier, I talked about the presentation and how great it is. But there is one aspect that I’m not the biggest fan of, and ultimately I think it is the game’s biggest weakness: commentary. The commentary is okay, certainly far from horrible, but it repeats itself too much and too soon and there is often a big delay; such as when the ball is hit to the fence, I grab the ball and throw it to second base without using the cutoff man, and it’s starting to go to the next batter coming up and the commentary is saying “and the throw is over his head.” Well the throw wasn’t to the cut off man to be over his head and this was five seconds ago. While the commentary is just okay, things like sound effects and fan noise is top notch.

All in all, The Show is sporting a big new mode that is fun and deep, a free Challenge of the Week mode, tons of new animations, new ways to play (pulse pitching, zone analog batting), new ball physics and situational collision awareness, and three really deep core modes that should keep fans coming back again and again. If you have a Vita, get both versions as there’s not a big difference in the feature set (only PS3 version features TruBroadcast and Diamond Dynasty) and there is cross-platform saves meaning you can take your Season, Franchise, and Road to the Show on the go with you. MLB 12: The Show is the definitive baseball game on the market today, and every baseball game fan should own a copy. Fans of the genre without a PS3 or a PS Vita are definitely missing out on one of the best sports games available.

MLB 12 The Show gets a four out of five: GREAT.