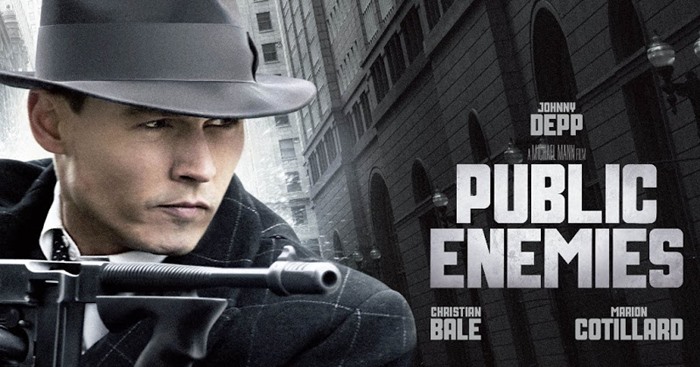 On the hot and humid night of July 22nd, 1934, John Dillinger was sitting pretty watching a gangster flick at the Biograph theatre in Chicago, Illinois, enjoying what must have been an all too rare moment of relaxation.

It would be the last such moment in his brief but fascinating life, and also the final film he would ever get to see, as when he walked out of said theatre that night with his two female companions, he would be transformed from a celebrity in hiding to a corpse on display, all the result of a team of lawmen whose job it was to bring him down, whatever the cost.

The movie John Dillinger saw that night was called ‘Manhattan Melodrama’ and it starred Clark Gable and William Powell in the story of a gangster and a politician, an ironic pairing, since in his own way, Dillinger was both of these things.

I had a chance to see part of that movie a few weeks back as a result of a brilliant marketing idea by Turner Classic Movies to run the picture as a tie-in to the new film ‘Public Enemies’, directed by Michael Mann and starring Johnny Depp in the lead role as the notorious bank-robber who terrorized tellers across the Midwest during the height of the Great Depression, becoming a modern day Robin Hood in the imaginations of some, a two-bit criminal in the minds of others, and most notably, public enemy number one in the sight of FBI director, J. Edgar Hoover, played here by Billy Crudup .

The man assigned to make sure that Dillinger’s legendary string of robberies and prison escapes came to a sudden and abrupt end was special agent Melvin Purvis, played here by Christian Bale.

That, in a nutshell, is the story that this movie attempts to convey. How well does it accomplish this? Well, as many hoods (and doctors) are known to say, “I got good news, but I also got some bad news. “

First, I’ll give you the good news.

The look and feel of this movie is very authentic to the time it was set in. The buildings, the wardrobes, the way people speak, and the hairstyles were all meticulously re-created with painstaking care and an obvious eye to detail.

The actors here are also obviously A-list talent, and they all give good and solid, if somewhat low-key performances in this movie, which considering that they are playing actual historic figures instead of fictional creations is somewhat understandable.

Now for the bad news… This movie is boring. It pains me to say that because this was a film I was very much looking forward to and went out of my way to see, but it must be repeated, that this film will put you to sleep faster than any prescription medication I know of.

The only things preventing an actual rejuvenating rest here are the occasional gun-battles which thunder and clang with true-to-life sound effects and realistic visual re-creations of bullets exploding into walls, tearing into flesh, and thudding against trees. Those brief exchanges represent the lone moments of excitement in an otherwise dreary and monotonous motion picture.

Another key thing the film suffers from is that it presumes too much upon the expert knowledge of the audience about the story being told here. Unless you are as interested in the narrative of John Dillinger and Melvin Purvis, and have read as many books about them and their cohorts here as the producers of this film, I predict that you will be absolutely lost in this movie.

I did do a little research here in the form of seeing a History Channel documentary on criminals of this era, and there were still numerous times when I felt like I had just walked into the middle of an ongoing conversation and had to re-wind the film and make sure I hadn’t missed something important along the way.

Something else this movie managed to do though, which I before would’ve thought impossible, was to seem both lethargically drawn out and incomprehensibly rushed, all at the same time.

It’s like this was originally made to be a four hour historical epic, but then got chopped in half, and released to the general public as is. Evidence of this can be found in the film’s most prominently followed relationship between Dillinger and singer Billie Frechette, played with warmth and compassion here by Marion Cotillard.

Dillinger grows to deeply love this woman, but all we see of their relationship is their initial meeting and brief courtship and a sparse amount of other tender moments, but before you can really begin to care about this relationship, they are separated by virtue of Dillinger’s arrest and not reunited until much later in the film, only to then be separated again by Frechette’s own arrest.

The moments they do have together are among the films high points though and give the most insight into Dillinger’s philosophy. “I want everything… right now” he tells her in one scene.

Other characters appear frequently who are crucial to the story, and close to the central characters, but you will have no idea who they are or why they are there unless you either pay very close attention or are extremely familiar with the major characters of this era in criminal and law-enforcement history.

Before I go too far into the negatives here, I will say that Johnny Depp must be given credit for his deep portrayal of Dillinger here. To say he becomes Dillinger would be an understatement, he simply IS John Dillinger from the first moment you see him to the last breath he breathes as the character.

Depp is also a good choice for this role, considering the cultural impact Dillinger had in his day as a renegade folk hero (deserved or not), someone of remarkable, yet understated charisma was required here, and Depp was indeed the man for the job.

Christian Bale’s performance as Melvin Purvis is solid, but gives him little to do and offers no glimpse whatsoever into his psyche or his personal life, as we get with Depp and his portrayal of Dillinger.

Billy Crudup’s J. Edgar Hoover is seen as mostly an idealistic bureaucrat who has no law enforcement experience and who expects a team of clean cut accountants to do battle with the hardened criminals of his day. And while I applaud the film’s eye for accuracy as far as period appearances go, that same approach was sadly neglected when it came to the actual story itself.

In my research for this review I noted several people who pointed out many glaring inaccuracies of all kinds here. I imagine this was all done for the sake of making the story of Dillinger more movie friendly, but in the end, it only made it more confusing and disjointed.

To conclude this part of the review here, I find it hard to imagine how someone who led such an exciting and dangerous life as John Dillinger did could have “inspired” such a downright dull movie.

Now to touch on some closing issues here. This movie sidesteps the rather pointed moral questions surrounding Dillinger’s actions. He is portrayed as a vicious but calculating criminal, who is not unaware of his growing popularity. It is with this in mind that he declines to partake in such crimes as kidnapping, because, as he says so himself, “the public doesn’t like kidnapping…”

But why should that matter to him?

It’s not really an attack of conscious you see, but more or less simple political pragmatics that leads him to sometimes hand bank customers back their own money while saying in defense of his actions “I’m just here for the bank’s money”…Although the obvious response there, is “From whom does he think the bank gets its money?”

Nevertheless, just like Jesse James a few generations before him was wise to go after the “evil” railroad industry that carved up the former Confederate territory and angered the citizenry of his time, John Dillinger was also prudent in choosing a mostly unsympathetic target in Depression era banks that were at the time foreclosing on small family farms in nearly unfathomable numbers.

His one big mistake in this regard though was partnering up with the notoriously psychopathic killer, George ‘Baby-Face’ Nelson, who himself was free of Dillinger’s concern for public opinion and simply enjoyed causing mayhem and murdering people by the dozens.

People like him caused the public opinion to sway on outlaws like Dillinger and made the Government declare an all out war on crime which would lead to the execution style deaths of legendary figures such as Bonnie and Clyde, Pretty Boy Floyd, and ultimately, Dillinger himself.

Public Enemies gets a two out of five: FORGETTABLE.