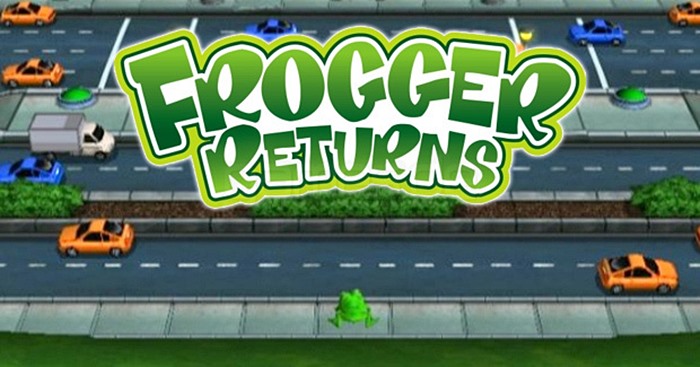 Frogger Returns is a $5 dollar download available in the Wii Shop Channel, and if you’re storing it on your Wii system memory, it’ll take up 203 blocks. Is it worth $5 and 203 blocks of space? Yes, yes it is.

Frogger Returns doesn’t rock the boat too much from the gameplay of the original. The goal is still the same, take the frog and avoid all the obstacles and time your jumps, to try and get to the lily pad, or this case your holding cell. It’s a very simple concept; if you’ve played Frogger then you will definitely know exactly how to play this sequel.

The graphics of Frogger Returns aren’t going to leave you breathless, but this is a five dollar download, so you probably aren’t expecting Super Mario Galaxy graphics to begin with. If you can still play the original game, then you’ll definitely have no complaints in the graphics department. For what the game is, the graphics are good enough.

Yes, the cars and enemies, they all repeat themselves, there really is no variety… but it’s a Frogger game, that’s the way it should be.

The levels look good, the obstacles all look decent enough. The only thing that really could’ve been designed to look a little better is Frogger himself. And the main menu, which is pretty terrible, but has nothing to do with gameplay.

When you download this game, it says it’s compatible with both the Wiimote and with the Classic Controller. Having spent a decent amount of time with it, I couldn’t figure out anyway to switch to the classic controller to actually get it working.

I’m not saying they lied about it, but damn if I could figure out how to do it. And that’s a bummer, because I really wanted to use the classic controller with this, because of how the Wiimote is set up.

The only buttons this game requires is the D-pad, to move in four directions. But the way they have it set up, you have to point the Wiimote at the TV, where being able to turn it sideways should have at least been a choice. Moving the frog around, I felt like I was changing channels.

But the controls are definitely simple; all you have to do is watch your frog and press Up, Down, Left, Right to navigate your way through the levels without dying.

It’s so easy, a caveman could do it.

Frogger Returns is packing four single player modes, but they’re all the exact same thing, just different in how you approach it.

“Arcade” is what everyone will know; you have a few lives and a time limit to avoid all the obstacles and reach the other side, all the while seeing how high you can get your score up too. This is classic Frogger through and through.

“Time Trail” is where you forgo playing for high scores, and instead see how fast you can complete the mission and stages. Instead of counting down, the ticker is counting up. So don’t be a slow ass and take your time, this mode is all about the speed.

This mode also gives you the option of playing through any of the games four different levels. So if you get stuck on the first or second “world” in Arcade, you can play the other ones here.

“Score Attack” allows you to play any of the levels, and it plays like Arcade; you have a time limit and lives, but you get rewarded bonus points for time remaining and lives you have. The object here is, get through the stage and have the highest score.

All three of those modes have separate leaderboards.

The final single player mode is “Free Play”. In Free Play, you have no time limit and no lives. You can get killed as many times as you like, and take as much time as you need. There’s also no scoring for this mode. So just take your frog and hop around to your hearts content.

This isn’t a competitive mode, so I assume it’s there for those casual gamers you hear so much about in regards to the Wii.

Frogger Returns supports up-to-two players locally across four gaming modes. There is no online support for this game, which is kind of missed opportunity because a game like this could have benefited from simple online leaderboards. But it is only five dollars, so you get what you pay for, so the lack of online is neither a big deal or unexpected.

Multiplayer works more like the traditional arcade game in appearance, as the camera zooms out to show the whole multiplayer stage to accommodate for both players, top down style. Like the single player modes, all the modes are a variation of the other.

Race to see who can occupy three of the five holding cells in one mode; another is the same concept only you have a five minute time limit and you can steal holding cells, so the object is to hold the most when time expires (WWE Scramble match FTW!)

The other two modes are variations of eating flies to collect points and get to the holding cell to “bank” those points, if you die before you make it to a holding cell, the points you’ve collected on the journey to the cell go away.

Multiplayer isn’t much, definitely nothing over the single player experience, but it is always nice to be able to play a game with someone else, so the modes are all welcome additions.

Compared to other games bearing the Frogger name, this one is pretty good. For $5, this one is a fun little no brainer, especially if you enjoyed the original Frogger. The price is really spot on, $8 would have been pushing it and $10 would have definitely been too much.

The single player mode has a few power-up type things, you can make obstacles move backwards (which can kill you if you trigger it at the wrong time).

My favorite is what I like to call “the cheat bubble”. With this bubble, you’re invincible for a short amount of time; you can run through cars, snakes, rats, through the water, etc. With it on, you should be able to easily reach the end of the mission before it runs out, provided you know how to properly navigate and don’t waste time running into walls.

If you have a Wii, definitely shill out the 500 Wii Points and download this game, if you enjoy Frogger. It’s a fun game, not a classic like the original and not something that will keep you playing for months, but it is worth a buy at its cheap price.

Frogger Returns gets a three out of five: SATISFYING.

Frogger Returns is also available on Playstation Network as a download for the PS3, and on DSiWare for DSi.